Chennai are devotees in season 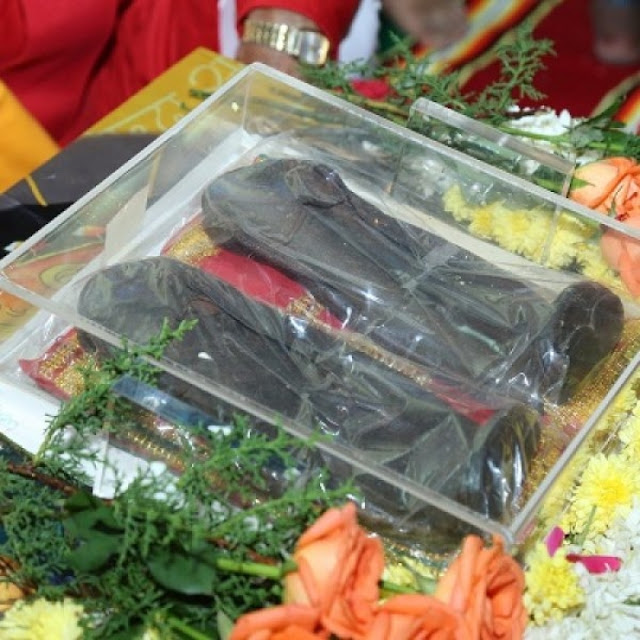 When they see the Lord, they start from Thiruvadi to Thirumaudi. Such a rise to the Lord's tirades; All that pride! The glory of the shoes that adorn Thiruvadi cannot be described. It is said that Thiruvadi Dikshit is the highest among the Dikshitas. It is because of the greatness of the shoes, that Bharathan ruled Sriramapran's shoes on his head and ruled as his representative.

If we have the privilege of seeing the shoes of the sons, then we are blessed. The people of Chennai have such a privilege. Let's see that wonderful event....
It is hundreds of years since Sri Sai Baba Mahasamadhi reached the eye of the Goddess, guarding the faithful. However, the blessing of the son is guarded by day-to-day firefighters. The Shirdi Shree Sai Baba Temple in Mylapore, Chennai, has been a blessing for the Sai Babs since 1952. The temple has been celebrating this year as the centenary of Sai Baba's Mahasamadhi.

As a part of this, Shri Sai Baba's Shrine of Shirdi Sai Baba, in the presence of Shraddha Sai Baba, awoke to Chennai and arranged for the vision of the devotees. It was expected that Bhagavan's shoes would arrive at 6 am this morning.

By 6 am, the temple of Sai Baba, which was decorated like the temple, was crowded with devotees. Sri Sai Baba was sung with all sorts of songs to sing songs of Kirtan everywhere. Pilgrims were standing in a long row and wearing a sahibhagavan. Time was running out. Saibhagavan's Thiruvadi shoes are not welcome. Devotees were talking about how easy it is to reach Saibagavan's Thiruvadi. At the same time, we have seen the zeal of those who do not go to the shoes of Saibhagavan, no matter how often.

On the one hand, the crowds on the other side were stunned to see that the temple was packed with devotees and police. Special rites and rituals were held for Saibhagavan.
At 11 o'clock in the hall inside the temple, the speaker Suki Shivam was talking about Saibhagavan's blessings. One of those comments made me think deeply. "You will see the elephant in the temple. It will be standing in a standing position, Tumblr will be as fun as it is. The nature of the elephant is to keep moving. Elephants in the jungle are not just in one place. They travel for six months through the jungles of Kerala and through Tamil Nadu to the forests of the northern border of Karnataka. Once the rainy season starts there, the journey will begin along the way. The elephant is a wandering elephant. Keeping this in one place is difficult. If the elephant in the temple is so moved, Pagan will immediately give it to him. That's it. Thinking of the biggest burden, the elephant will remain unmoved.

The human mind is like that. So the temptation and the temptation will continue. Like a guru, the Lord will come and give him the name of the Lord. That is how the mind wanders and merges with the magical chant. Bhagwan Ramana has expressed this view. If you want your mental games to stand together, hold on to the name of Sai Baba. It will enrich your life. ” As he listened to his speech, the slogans of praise on the outside leaned out. Explosions also pierced the ears. The crowd of devotees rushed out saying that Bhagavan's shoes had arrived.

Sri Saibhagavan's shoes were in the decorated vehicle. Carrying shoes with magical slogans, Srikapalisvara, opposite the Sai Baba temple, placed them on the first floor of the Kargampambika Mandapam for the devotees.

There were priests and some guards from Shirdi with shoes. The police dispatched a wave of pilgrims and dispatched the crowd. There the saikaktars gathered and sang hymns. Some of the devotees who worshiped the shoes of Bhagwan Sai Baba who was inside the mirror, wept bitterly. 'What penance did you see in the shoes of Saibhagavan's thirtieth?' The sky outside was welcomed with a sprinkling of water.

There were priests and some guards from Shirdi with shoes. The police dispatched a wave of pilgrims and dispatched the crowd. There the saikaktars gathered and sang hymns. Some of the devotees who worshiped the shoes of Bhagwan Sai Baba who was inside the mirror, wept bitterly. 'What penance did you see in the shoes of Saibhagavan's thirtieth?' The sky outside was welcomed with a sprinkling of water.

Today's (8-11-17) and 9-11-17 Mayalapur Srikapaleeswarar will be placed in the Kargampambi Mandapam. Visit from 6 am to 7 pm. At 7 o'clock tomorrow night, the turrets will be paraded on the streets of Mylapore. It will then be sent back to the Shirdi temple with treats. It is truly a privilege that we have, that the rare treasure of the unseen treasure trove of sailboat is upon us.
Labels#Chennai are devotees in season, #Shiridi Sai Baba's shoes